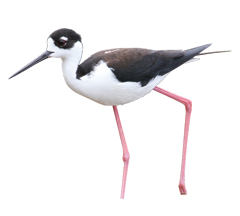 A striking black-and-white bird with very long, thin red legs, the Black-necked Stilt is found along the edges of shallow water in open country.

Black-necked Stilts are small shorebirds. They have the second-longest legs in proportion to their bodies of any bird, exceeded only by flamingos. The Hawaiian subspecies of Black-necked Stilt has the black of its neck reaching much farther forward than the mainland forms.

These birds have a black face, hind neck and back. They have white throats and underparts and are very long with thin red legs. They also have long, thin, straight black bills. Juveniles look similar to adults, with scalloped pattern on their back with a white trailing edge on their wings.

Black-necked Stilts wade for their food, and will only swim or dive when under duress. During breeding and during winter, they are strongly territorial birds, and are particularly aggressive to chicks that are not their own. When not breeding, Black-necked Stilts roost and forage in closely packed groups, often staying within a foot of each other. Black-necked Stilts are semi-colonial when nesting, and they participate en masse in anti-predator displays. The displays include one in which non-incubating birds fly up to mob predators, and one in which all birds encircle a predator, hop up and down, and flap their wings.

Black-necked Stilts inhabit shallow wetlands from the western United States to Central America and parts of South America. In the United States, Black-necked Stilts are commonly found in salt ponds, flooded lowlands, or shallow lagoons. Human-maintained wetlands such as sewage ponds or flooded pastures are particularly suitable habitats for these birds, since such environments have some sparse vegetation without being too overgrown. The endangered Hawaiian subspecies, the Ae’o, lives in wetlands, mudflats, and ponds on all the major islands.