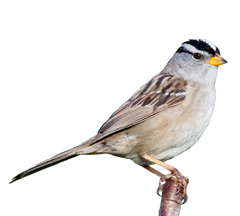 The White-crowned Sparrow is a large sparrow with a small bill and a long tail. The head can look distinctly peaked or smooth and flat, depending on the bird’s attitude.

First impressions of White-crowned Sparrows tend to be of a plain, pale-gray bird; next your eye is drawn to the very bold black-and-white stripes on the head and the pale pink or yellow bill. Learn this bird’s size and shape so you’re ready to identify young birds that have brown, not black, markings on the head.

You’ll see White-crowned Sparrows low at the edges of brushy habitat, hopping on the ground or on branches usually below waist level. They’re also found in open ground (particularly on their breeding grounds) but typically with the safety of shrubs or trees nearby.