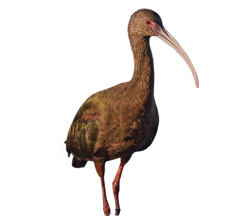 These birds breed in colonies that often shift from year to year with changes in water levels. Nest sites are usually in dense marsh growth (such as bulrush or cattails) or in low shrubs or trees above water, sometimes on ground on islands. Their nests (which are built by both sexes) are a bulky platform of bulrushes or other plant stems, with depression at center. Materials are gathered from nearby the nest site, and are sometimes stolen from vacant nests of other birds.

A wading bird with a long, down-curved bill the adult White-faced Ibis have long dark legs.

These birds have dark brown necks and undersides. Their wings are shiny and vary in coloration; from green to blue to pinkish tones. True to their name they have a white band around their bill that encompasses a red line from their eye to their bill. Juveniles are similar to adults with a dark banded bill and duller body.

White-faced Ibis forage mostly by wading in shallow water, probing in soft mud for food. They also eat insects and other items from surface of water or soil, or from plants above water.