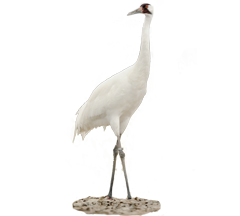 The graceful Whooping Crane is an inspirational symbol of conservation. Though this bird remains an endangered species, it has rebounded from a low of just 15 cranes in the 1940s to about 600 today. Its recovery has been thanks to tireless efforts by conservationists, including Operation Migration, a creative program that helps Whooping Cranes learn migratory routes by leading them with an ultralight aircraft.

Very large, graceful birds, Whooping Cranes are the tallest bird in North America. While in flight, their long necks are kept straight and their long dark legs trail behind. They can stand up to 5 feet tall and have a wingspan of 7.5 feet.

Adult Whooping Cranes are snowy white overall with dark red crown and mustache stripe. They have long black legs and thick bills that are pinkish at base and grayer near tip. Adult whooping cranes’ black wing tips are visible during flight. Juveniles are similar to adults, but are largely cinnamon-toned, with some white, and without red on head and face.

Whooping Cranes live in family groups. Newly paired cranes often locate their first territory near that of their parents. They eat a wide variety of plant and animal matter, including mollusks, crustaceans, insects, fish, frogs, and waste grain. In courtship, Whooping Cranes perform an elaborate dance display with leaps, sweeps, wing flaps, head tosses, and flinging of light objects such as feathers and grass. They feed on the ground, pecking, probing, and stabbing food with their bills.

Whooping Cranes breed in freshwater marshes and prairies. Uses grain fields, shallow lakes and lagoons, and saltwater marshes on migration and in winter.