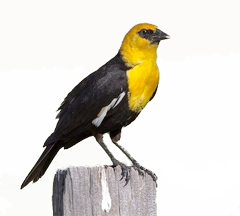 With a golden head, a white patch on black wings, and a call that sounds like a rusty farm gate opening, the Yellow-headed Blackbird demands your attention. Look for them in western and prairie wetlands, where they nest in reeds directly over the water. They’re just as impressive in winter, when huge flocks seem to roll across farm fields. Each bird gleans seeds from the ground, then leapfrogs over its flock mates to the front edge of the ever-advancing troupe.

Yellow-headed Blackbirds are fairly large blackbirds, with a stout body, a large head, and a long, conical bill.

Yellow-headed Blackbirds breed in loose colonies, and males mate with several females. During the breeding season, they eat insects and aquatic invertebrates. They form huge flocks in winter, often mixing with other species of blackbirds, and feed on seeds and grains in cultivated fields.